The Port of Harlingen provides an efficient and economical transportation link along the Texas coast for shallow draft transport. Located near the southernmost tip of Texas on the Arroyo Colorado River. The Port is 25 miles inland of the Gulf Intracoastal Waterway (GIWW), which stretches from the Mexico border along the entire coast of the Gulf of Mexico and northward along most the US Eastern Seaboard to Florida. The Port is also connected to the Atlantic Intracoastal Waterway (AIWW), a 3,000 mile inland waterway along the Atlantic and Gulf of Mexico, running from Boston, MA to the Southern Tip of Florida and encompassing the GIWW, which extends to Brownsville, TX.

The Port of Harlingen encompasses more than 2,000 acres of land with 650 linear feet of multi-cargo wharf and five docks. As the second largest port in Cameron County, the Port handles an overall cargo tonnage of about 2 million tons annually. Commodities transported through the Port now includes liquid fertilizer, cotton, sorghum, corn, sand and aggregate, diesel, gasoline, ethanol and raw sugar.

To enhance economic and community growth through quality and efficient transportation.

As committed stewards of the Arroyo Colorado River and surrounding community, The Port of Harlingen seeks to create a robust economy as an innovative, efficient and effective transportation link for shallow draft barge and multi-modal goods movement.

Click here to view our Master Plan. Created in 2019, the strategic and master plan is our roadmap for the future development for The Port of Harlingen. 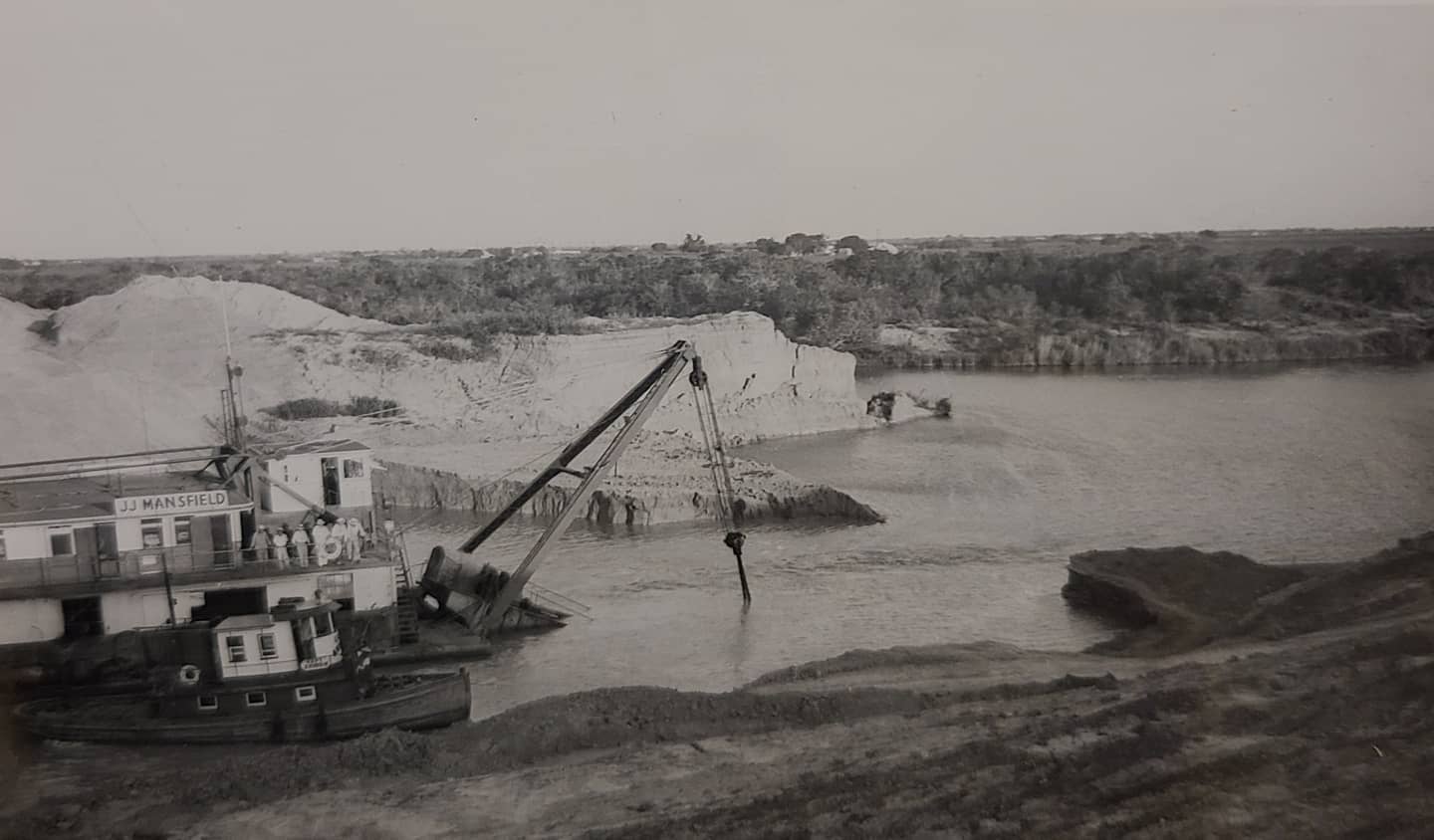 In June 1951, the Port of Harlingen was linked by water to the Midwest as the last of the dredging in the Arroyo Colorado was completed connecting Harlingen to the Intracoastal Canal. 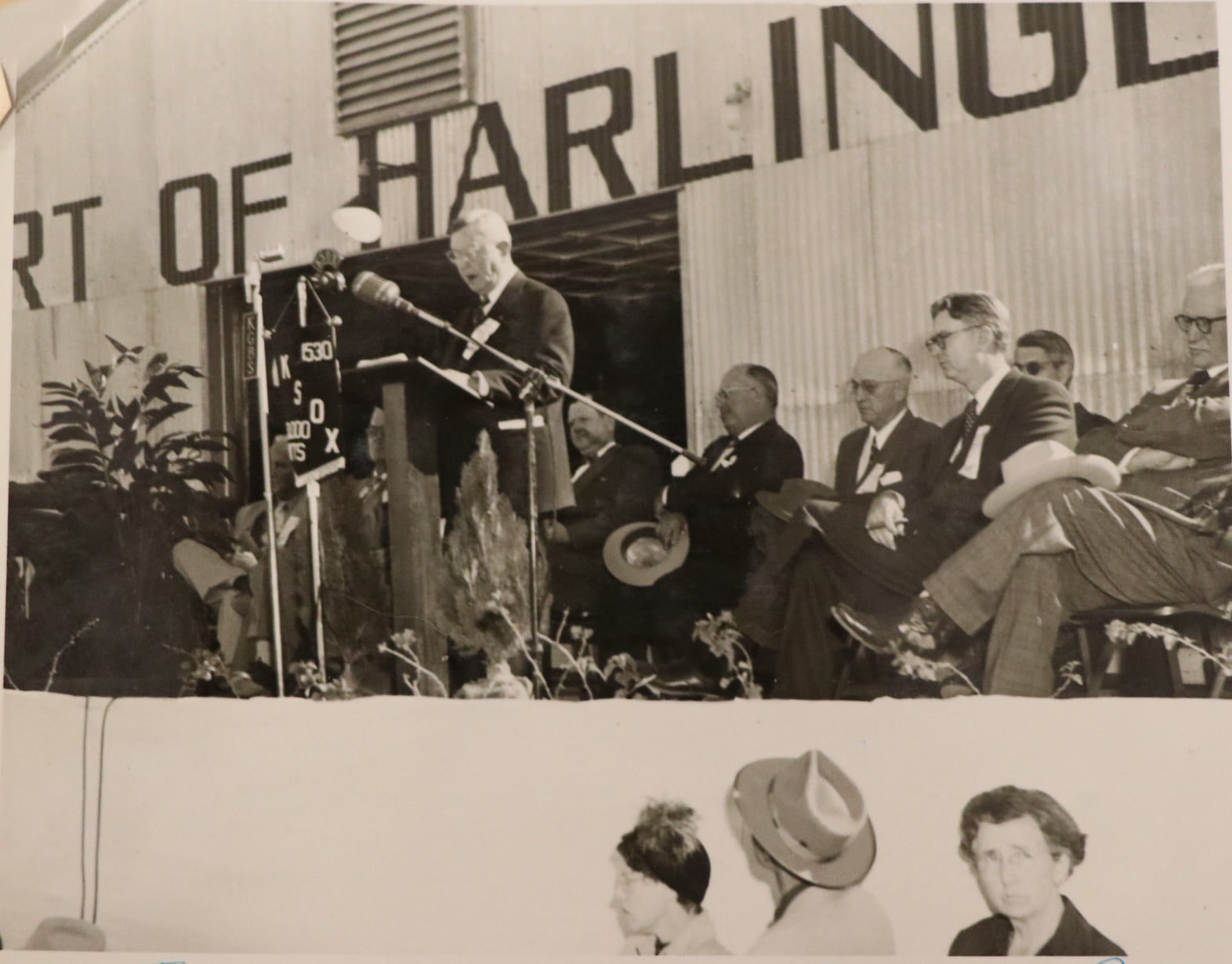 John W. Fullbright, president of the Intracoastal Canal Association of Louisiana and Texas, addresses the crowd at the opening of The Port of Harlingen on Feb. 26, 1952. 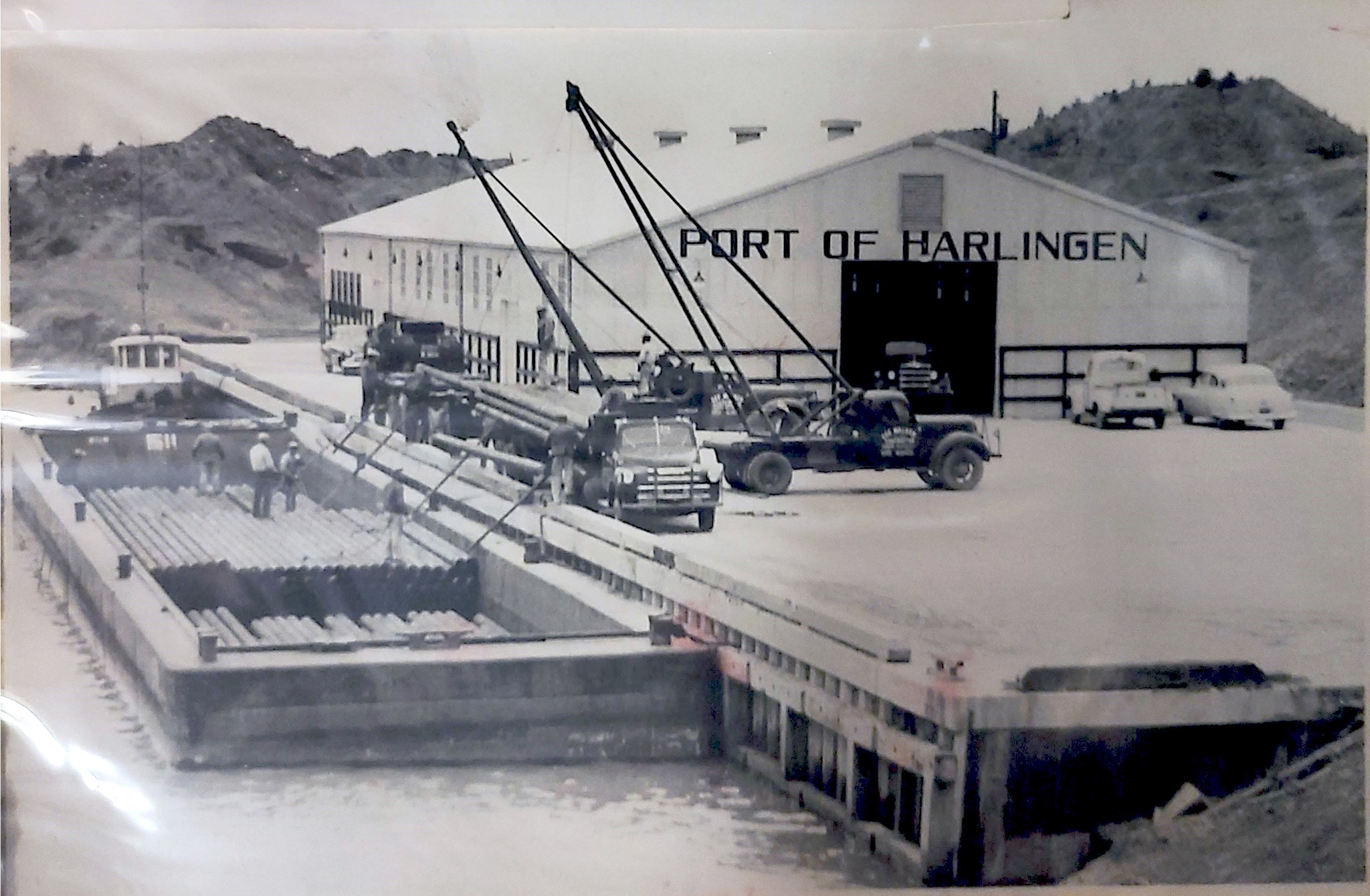 The second shipment over the Port of Harlingen docks on April 6, 1952.

Organized as a navigation district, officially known then as the Arroyo Colorado Navigation District of Cameron and Willacy Counties (ACND), the Port was created under the Texas Constitution Water Code, Chapter 62, Section 59. Although established in name and concept, the Port was not operational until 1952. Years of strategic planning, effort and river construction and maintenance created the thriving Port it is today. As it stood in the 1920s, the Arroyo Colorado, an offshoot of the Rio Grande River, was not a navigable waterway. Although it emptied into the lower Laguna Madre near the lower Texas coast of the Gulf of Mexico. However, city and and county leaders determined that if it were made navigable, the area would benefit greatly from a water highway connecting Harlingen to other major ports along the Gulf of Mexico and the United States.

From 1926 to 1941, Port commissioners worked with local banks, and state and federal organizations to finance, plan and execute the organization, permitting and dredging of the Arroyo Colorado for navigation. The ACND held its first bond sale of $500,000 in 1927 to set financially the wheels of progress in motion.

It was not until 1938 the U.S. Army Corp of Engineers approved a continuous channel from Harlingen to the Laguna Madre via the Arroyo Colorado. Over the next nine years, 1942 to 1951, construction of The Port commenced, which included dredging the river to appropriate depths and widths for the transportation of goods via barges, rerouting the river for ease of tug movement, creating a turning basin and connecting the Arroyo Colorado with the Gulf Intracoastal Waterway (GIWW). Work toward the Port also included a bond issue election in April 1946 of $625,000 to cover a period of 25 years for facilities, right-of-way and disposal property, which passed by a 4 to 1 margin. A tax levy was also set in 1947 at $0.06/$100 for operations and maintenance, which stayed in effect until 1951.

By 1951, the dredging of the Arroyo Colorado connecting the intracoastal waterway at the wye was finished, leaving only the Port’s turning basin to be completed. This was accomplished by 1952 and the Port in Harlingen was officially open for business on Feb. 28, 1952. The first cargo scheduled to be discharged was 2,728 tons of steel pipe on five barges cosigned to Continental Oil Co. Growth in land acquisition and vessels utilizing the port grew through the 1960s and 1970s leading to the expansion of capital improvement projects, which included re-building roads, new access roads, warehouse construction, drainage and new docks.

In 1980, the Port finished construction of the administrative offices, where it currently stands today. In 1981, commissioners submitted a bill to their state representative to change the name of the “Arroyo Colorado Navigation District” to “The Port of Harlingen Authority,” which it had been referred to by state and local departments as for years. In May 1983, the Port officially became “The Port of Harlingen.” It was also in the 1980s that the Rio Grande Valley Sugar Mill would begin shipping a portion of their raw sugar through the Port, which was an initial estimate of 25,000 tons a year. Today, the Port exports an average of 30 shipments a year totaling about 150,000 tons.

The Port Harlingen administration are here to help meet transportation needs, services and goals of the greater Harlingen, Cameron and Willacy County area and South Texas. 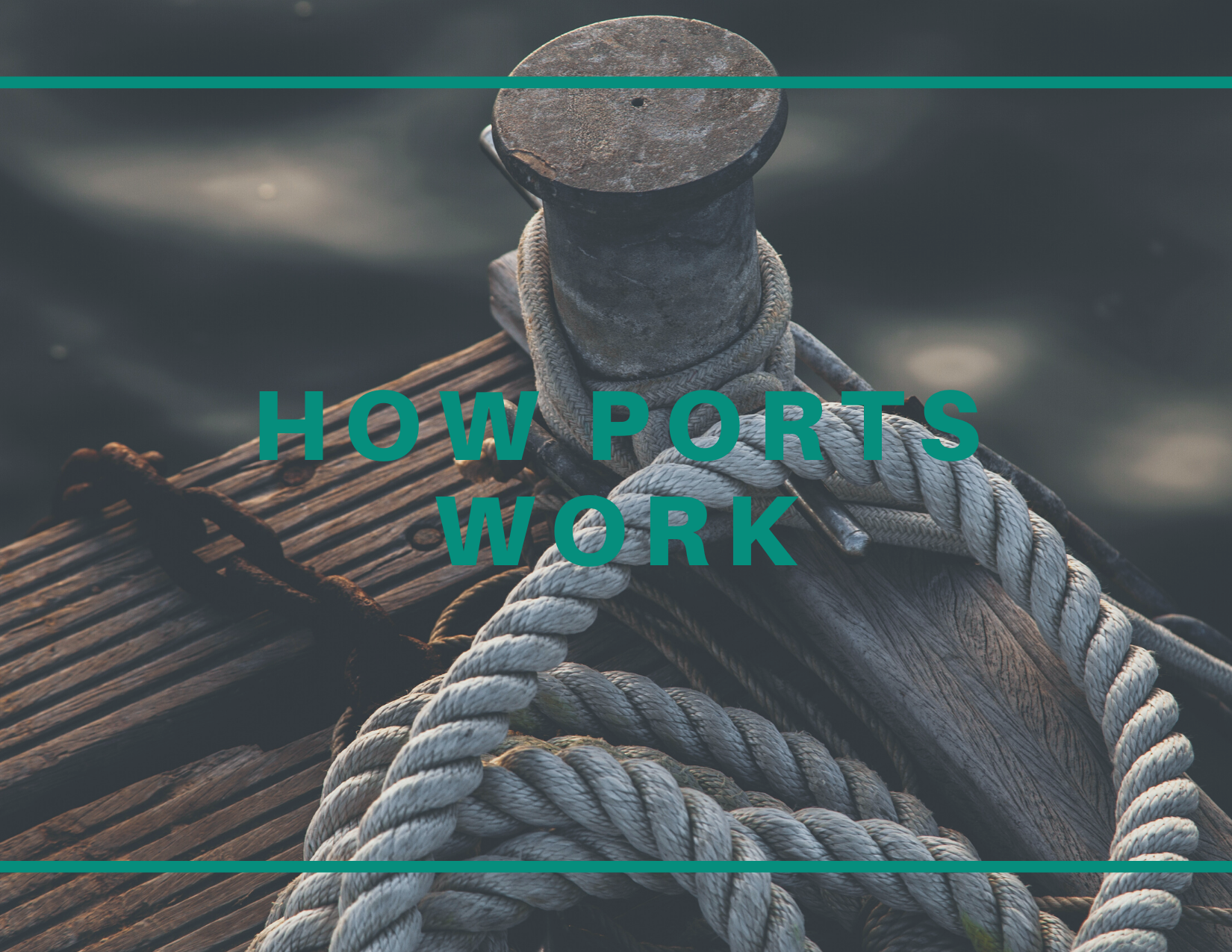 How are ports governed?

Ports in Texas are typically specialized navigation districts organized under the Texas Constitution. They are governed by a commission either appointed, or elected, dependent on how the district was created, which are independent of other local jurisdictions. The Port of Harlingen is governed by an elected commission of elected to six-year terms.

Go to our Port Board page to learn more about our commissioners.

How are ports financed?

Ports are unique – a public entity with a profit motive, or public enterprises.  A port district’s primary goal is economic development for its community, with the end result of job creation that pay a family wage and encourage growth.  Port districts are able to finance the long-term investments needed for such growth with different sources of revenue: usage, service and tenant fees, taxes, bonds, and grants.

Usage and Tenant fees: When a port district builds a facility, it typically leases it to a business and collects fees for the building and land.  The Port of Harlingen rate structures into key areas including:

Why taxes?: Tax districts for Ports are very common around the United States. Most ports use the funds generated through the tax levy to pay for maintenance and operation – development of needed infrastructure and facilities. Investment in these facilities is necessary to attract and retain businesses to a region.

The Texas Water Code, which authorizes the formation of navigation districts, also authorizes a tax levy for those districts in our state. The Port of Harlingen has actually had a tax since 1928, but for various reasons chose to levy, and not levy, the collection over the last nine decades. In 2018, the Port reinstated the tax that suspended in 1997 at a rate of $.03 per $100 valuation, which would be paid by residents living within the Ports District boundaries (link). The taxing district plays a vital role in growing a port. Because The Port of Harlingen has grown exponentially, funds to accommodate the potential growth far exceed what our current revenue. Utilizing the taxing district allows the Port to use those funds for maintenance and operation projects, which frees revenue funds to pay for capital investments, such as terminals and facilities, which cannot be funded by tax dollars, to accommodate necessary growth.

Grants: Ports can apply for state and federal grants for improvements. The Port of Harlingen was the recipient of a Texas Department of Transportation Rider 45 Grant for road improvements totaling more than $7,850,000. The Port of Harlingen, like other ports in the United States, works with U.S. Army Corp of Engineers (USACE) for river maintenance and dredging projects. Funding through the USACE is allocated for ports based on tonnage handled through the ports and growth projects proposed by port administration. Based on shipping cargo data reported by the Port, federal entities, like the USACE, can earmark funding to support growth. In 2017, The Port of Harlingen was allocated 2.4 million to dredge the channel to maintain the channel for navigation.